Day 5 was to be my longest day on the West Highland Way and given how sore my feet were at the end of Day 4, I was feeling a certain amount of trepidation about it!

Dave & I had decided we would go our separate ways today.  I was still keen to walk the rest of the Way on my own and he was feeling much better and ready to camp again, after two nights recovering in comfy beds!  We knew we would see each other throughout the day as we walked anyway, along with the rest of our trail buddies – we had quite a few folk we were friendly with by now and it was really great to see smiling faces and stop for chats along the way.  Particularly towards the second half of the walk, where there are really only one or two places to stay at each stop, you end up getting to know your fellow walkers and I really enjoyed this aspect of the trip.

We had breakfast together and then I headed off as I wanted to get an early start with my long day – Dave was only covering 13 miles so could afford to be slower!

So, off I set for the mile of walking just to get back on the trail before I could start my 16 miles! Eep!  Happily, I was feeling pretty good this morning – the feet seemed to have recovered well from last night’s soreness and I felt full of energy.  Just as well, as there was a fair climb out of Crianlarich! Here’s my first selfie of the day, at the top.

I went past this tent, whose owner still seemed to be sound asleep judging from the gentle snores I could hear! Lovely spot for a wild camp!

Once the climb out of Crianlarich was out of the way it was nice easy walking this morning with some beautiful views.  Here are the Crianlarich hills from Strathfillan. 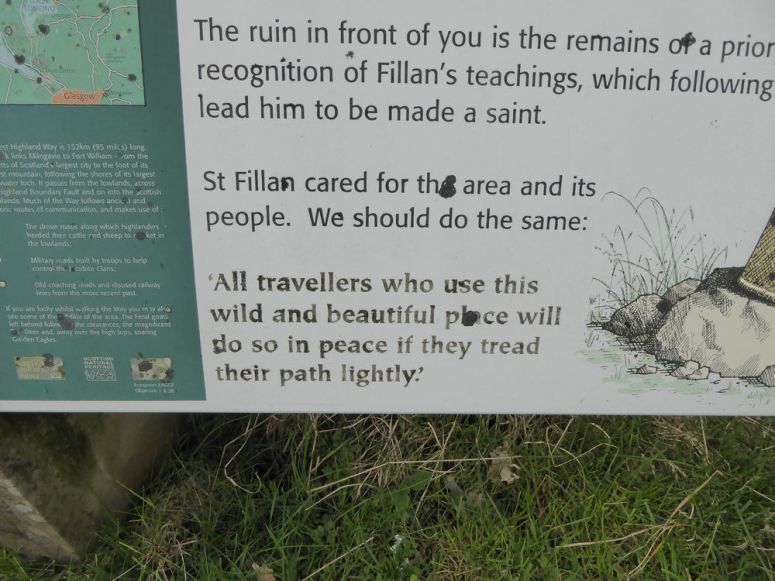 There were lots of cute wee lambs all over the place! 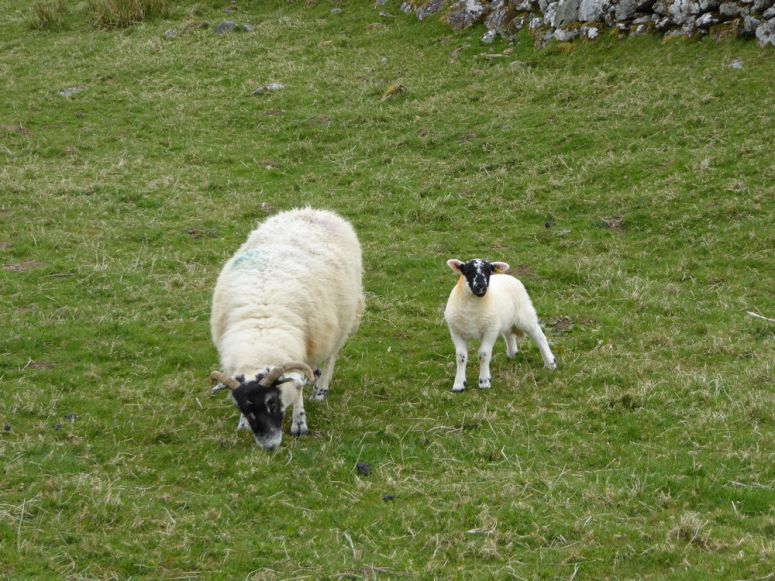 It wasn’t long before I headed on one of my “off piste” trips – I spotted a sign for St Fillan’s “Holy Pool” and went off to investigate, thinking it might be a nice spot for today’s ashes.  However it proved a bit underwhelming – a pretty enough river but nothing special! So I pushed on.

I stopped for my first rest at the 4 mile point on a handy bench by this lovely bit of river.  At this point Speedy Dave (as I shall now be calling him) caught me up and we stopped for a chat and shared some jelly babies before he headed off in front of me. 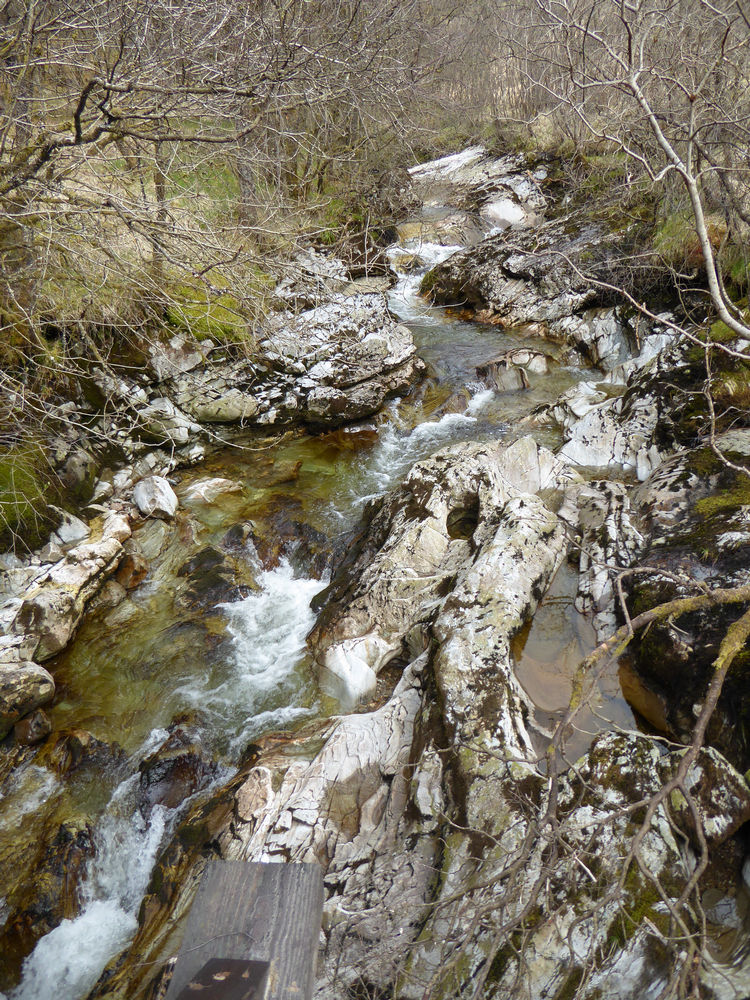 The trail passed by the Lochan of the Lost Sword – how very Lord of the Rings, again!

What with this, and the Shire and Trolls Bridge signs on Day 1, I was starting to feel like Frodo.  It was interesting that both Dave & I remarked to each other that we found walking this long distance trail had a completely different feel from just ordinary day walks we do quite often at home.  Because you are heading in one direction and walking every day it really does start to feel like a quest …. OK, so a pub in Fort William is not quite as dramatic a destination as the fires of Mordor, but still!

I arrived at Tyndrum, the 6 mile point, which I have to say I did not like at all! The place was absolutely mobbed with people – it’s a very popular tourist spot for exploring the Highlands – and after the peace and quiet of the West Highland Way, with only other walkers for company, the noise of traffic and loads of people was all a bit overwhelming!  It was too early to stop for lunch anyway (I like to get past halfway before I eat my lunch!) so I hastily bought some food to stash in my pack for later, stopped for a quick chat with Dave who was eating his lunch there, and then beat a hasty retreat.  Five minutes later I was back on the trail with only the noise of birds, rivers and the wind again, ahhhhhhh that’s better!

Once again there was a tunnel under the railway to negotiate but thankfully this one was taller than the Sheep Creep!

The trail was now following the old military road so the walking was nice and easy, although it was tough on the underneath of your feet, being quite rocky.  The views were starting to open up again looking towards Beinn Dorain ahead.  Another one I’d quite like to climb at some point – the views from the top must be spectacular!

There were lots of lovely waterfalls along this stretch and this one was particularly stunning, so this was today’s spot for scattering ashes ❤

Around the 9 mile walk I came across two girls, one of whom was having some serious blister problems and bemoaning that she had forgotten her zinc oxide tape.  I stopped and gave her some of mine, and then decided this would be a good lunch spot too, so settled down for a rest, foot airing, deep freeze gel, and food!  I felt bad for my new friend – she had walked the Way before and this time was only walking from Tyndrum to the end as her friends who were visiting wanted to experience part of it.  She was wearing boots she had had for ages and had walked loads in, but she had put on new socks that day which she reckoned accounted for the blisters. I met up with her again at Kings House on Day 6 and she was in flip flops, the blisters having become unbearable.  She had missed that day’s walking as they were so bad, getting the bus to meet up with her friends there.  It made me really appreciate my comfy shoes and how lucky I was that I didn’t have any of these sorts of problems!

After chatting with the two girls while I scoffed my lunch, Dave caught me up again and stopped for a chat and to snap this very flattering photo of me stuffing my face! 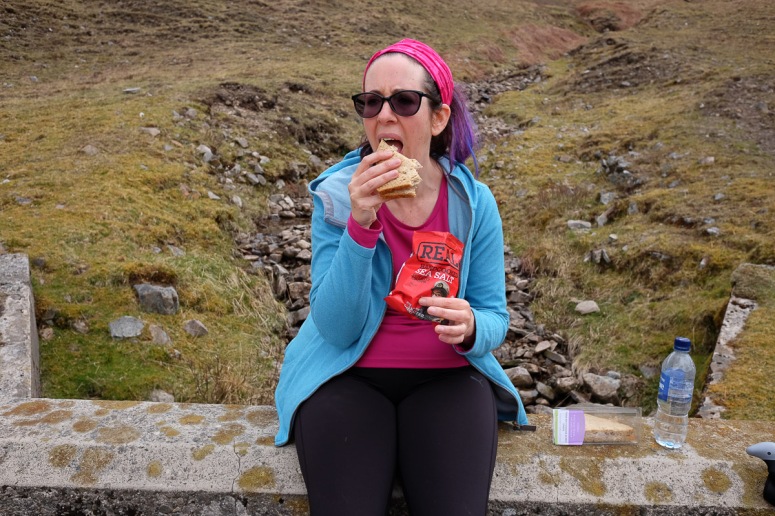 Then once again he went off ahead of me.  I set off again feeling refreshed after my lunch and was delighted to find a field of hairy coos alongside the trail …. a bit too far away to get any decent shots but here’s one anyway 🙂

The rest of the way from here to the Bridge of Orchy was lovely easy walking, not too hilly, not too tough underfoot, probably the easiest section of the whole Way actually now that I look back on it! Which was rather fortunate as it fell in my longest day! 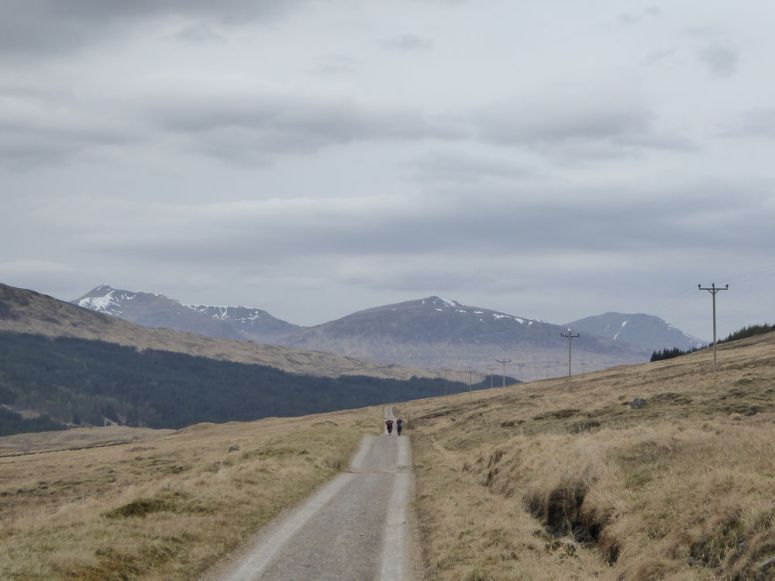 After 13 miles I arrived at Bridge of Orchy.  Dave was planning to wild camp here and when I arrived he was already there, having a drink outside the hotel with two lads who we’d made friends with – one was called Simon but we never got the other’s name.  They had mostly been wild camping along the way – we saw them at the most beautiful spot alongside Loch Lomond on the day we were walking together.  They were faster walkers than us, but the fact that they didn’t seem to get going until mid-morning, combined with their habit of stopping for a pint at every opportunity, meant we kept overtaking each other throughout the walk!  I stopped for a chat with the three of them and munched a mars bar in the hopes it would give me enough energy for my last three miles, which I knew involved a bit of a climb – not what you want at the end of a 16 mile day!  After leaving Dave at his camp spot next to this beautiful river I set off for my last section. 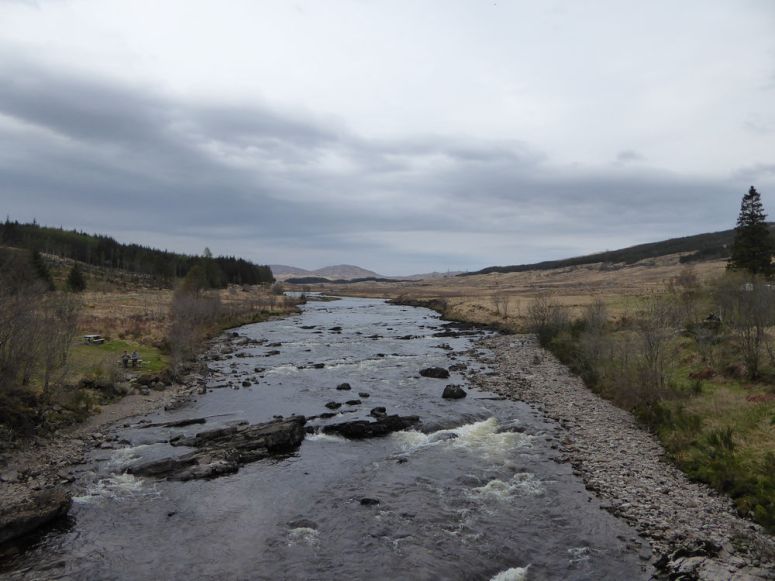 This last section reminded me very much of the Cornish Hill walk at home which I do quite often – same sort of distance and same sort of path.  It was a bit of a climb but nothing too strenuous and the views at the top were epic. 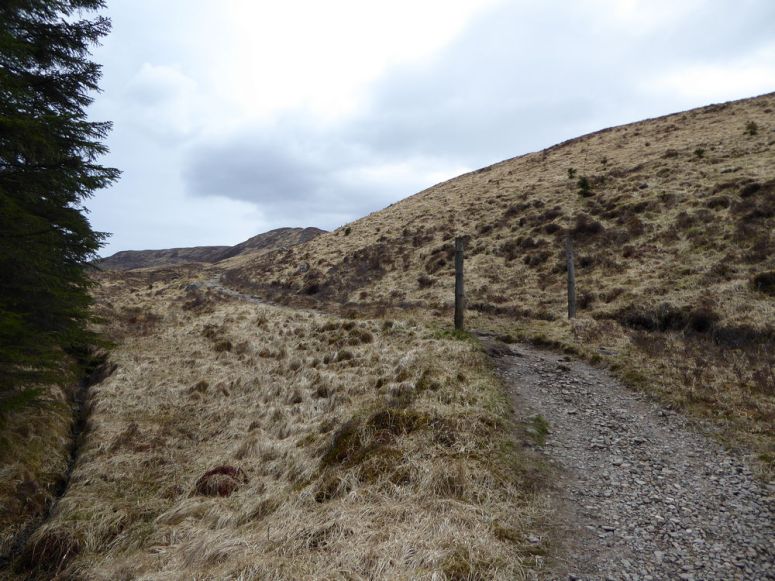 When I arrived at the top I headed off path again to get to the summit cairn and for the first time but not the last on this trip, I was so overwhelmed with the views that I actually cried.  It was stunning up there.  A trio of French girls came up and joined me, so we all took photos of each other as you do 🙂 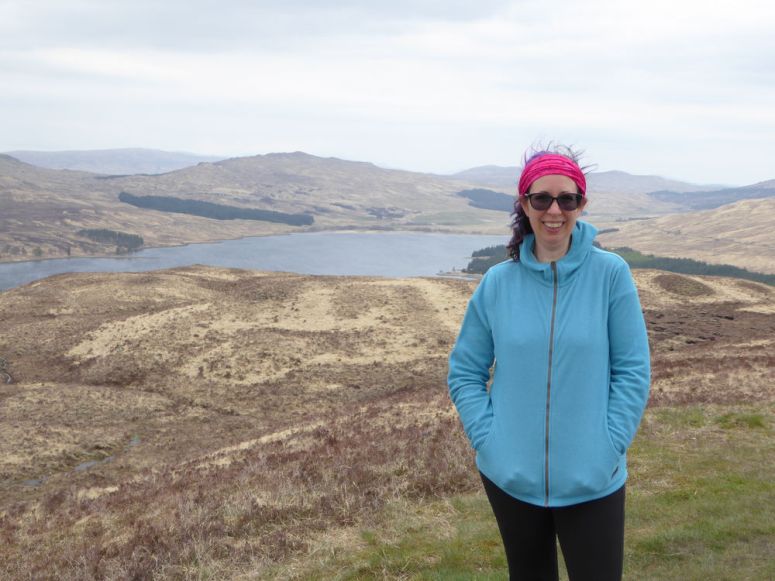 They headed off after a few minutes but I stayed a while longer to drink in the views and savour the moment.

Looking down I could see the Inveroran Hotel where I would be spending the night – how’s that for an awesome location?

Eventually my need for food overwhelmed me and I made the descent down to Inveroran.  The hotel there was absolutely lovely – highly recommended – the room was comfy, the service was excellent, and the food was delicious.  Despite these worrying signs next to my window the midges had not yet arrived this year!

I went down to the bar after I’d showered to write in my journal for the first time in 3 days, and have a wee dram of Glayva to celebrate finishing my longest day!  I ended up chatting to two girls and making a fuss of a beautiful 14 year old German Shepherd doggie.  After a delicious dinner I contemplated going back to the bar and being sociable, but tiredness got the better of me and once again I was in bed by 8.30!   I was pretty proud of myself for completing the walk today, I think it was the furthest I had ever walked and considering how sore my feet had been after Day 4 I was very happy with how strong I’d felt today 🙂  Well done feet!