Day 4  would take me to the halfway point! I had mixed feelings about this – on the one hand it would feel like an achievement – on the other hand, that would mean half my adventure was already over!

I was expected today to be tough as it was another 13 miler and I had heard that the first 3 miles north of Inversnaid were the toughest of the whole Way, in terms of terrain.  The path here runs right next to Loch Lomond and has been badly eroded over the years so there is much scrambling over rocks and exposed tree roots.  Well, it was just as tough as expected!

Dave & I pondered whether to walk together again or go our separate ways.  I was still keen to walk the majority of the Way alone, but was also happy to see my husband and had enjoyed walking together the day before.  Also, today was our doggies’ birthday (they were pups from the same litter) and we had mentioned before the walk that we would both be sad today thinking about them.  So we decided that we would walk together for Day 4 and then go our separate ways after that.  With hindsight, a lot of today was hard slog – probably my least favourite day of the lot in terms of the physical toughness, terrain and views – so it was nice to have company for it!

Before we set off we paused to admire the view outside the hotel – Loch Lomond really does have bonnie, bonnie banks.

Which was just as well, as it gave us plenty of nice views to distract us from the walking, which on this part of the trail was nothing short of torturous! Rocks, tree roots, big drops where you had to use hands as well as feet to scramble over …. I was just very grateful for the dry weather and sunshine – doing this when it is wet and slippery must be a nightmare! 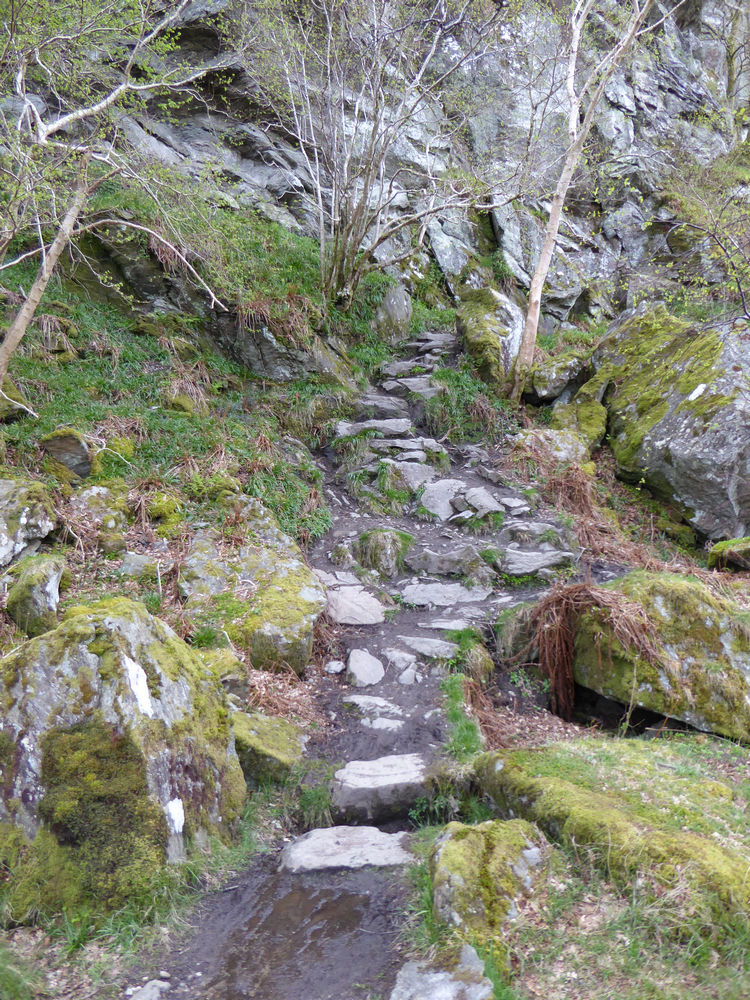 We decided against a side trip to Rob Roy’s Cave, not wishing to add more rock scrambling to our day! 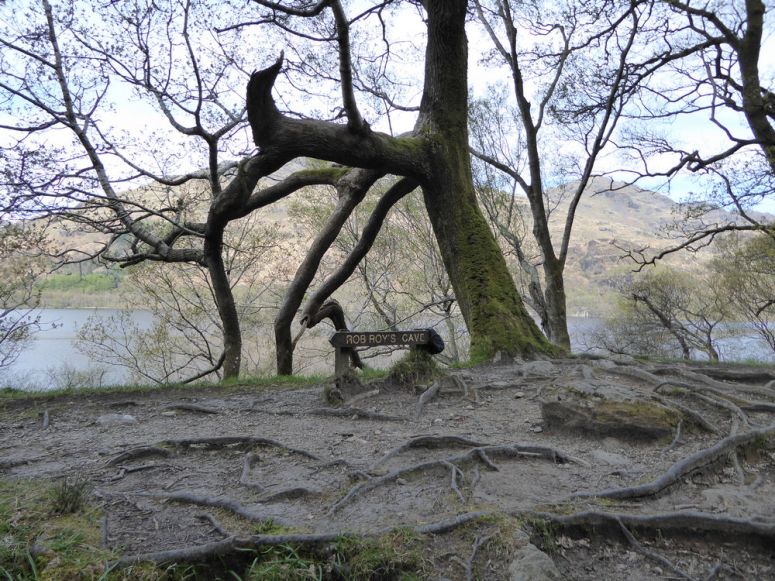 We saw these groovy looking ducks on the loch.  I’m no birdwatcher but I really enjoyed seeing new birds I hadn’t come across before while walking the Way.  I had no idea what these were at the time but a search on the RSPB website tells me they are Red-breasted Mergansers.  I liked their funky hairdos!

Eventually the path started to get easier …. which is just as well, as we had been averaging about 1 mile an hour over the rough bits and were hoping to get to Crianlarich sometime before midnight!

Amazing views, they just kept coming round every corner.

Finally after what felt like hours, we emerged to the welcome sight of Doune Bothy.  Only 4 miles into our 13 mile day and it was already nearly lunchtime! We stopped for a wee snack and rested the sore feet while admiring the views. 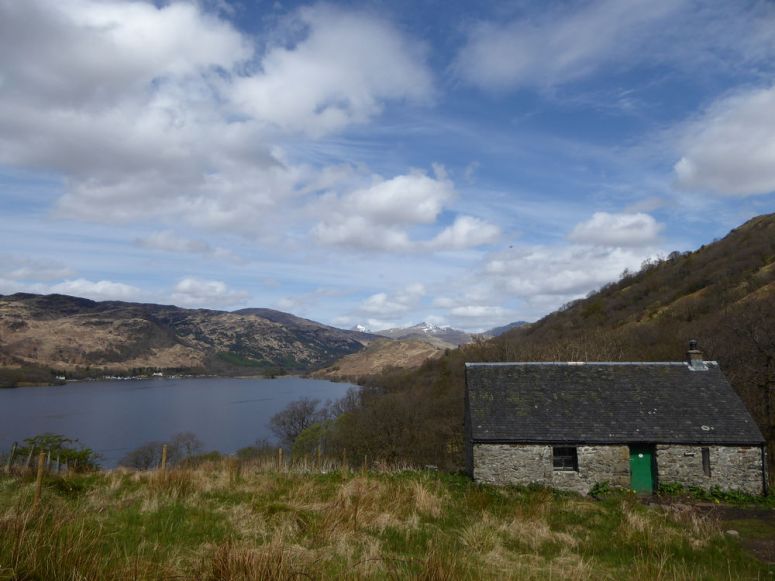 The trail then took us back down to the loch shore which seemed like an appropriate place for scattering some ashes.  It was nice to be with Dave today as we both shed a wee tear and remembered our lovely boys.

I spotted another bird I hadn’t seen before – we thought it might be a dipper but having consulted the interwebz on our return it seems it’s a sandpiper.

After this last beach we had reached the end of Loch Lomond!  I felt quite sad to say goodbye to it after walking beside it for the best part of 3 days.  We paused at the top of this hill to enjoy one last parting view.

The people you can see coming up the path behind us were doing the West Highland Way in three days.  THREE DAYS!!  Mentallers!  Unsurprisingly they overtook us and disappeared off into the distance at great speed 🙂

Now we were away from Loch Lomond, almost straight away there was a different feel to the land – wilder and more dramatic.  It felt like we were heading for the proper Highlands now!  The walking was hilly, but definitely easier than the lochside path.

Eventually, and somewhat later than anticipated, we arrived at Beinglas Farm near Inverarnan, the 7 mile point of today’s walk, where we collapsed onto a seat, drank copious amounts of lime and soda and ate some lunch.  It was a lovely campsite and I’d happily go back there for a holiday – I loved these cute camping cabins!

Thankfully the next section after our lunch stop was easier – lovely walking on nice paths alongside the River Falloch.  It was really beautiful with lots of pretty waterfalls and rocks, and gorgeous mountain views in front of us too.

We stopped at the 10 mile mark for another wee rest and snack.  We were both struggling now after the tough start to the day and the cumulative effect of the miles we’d done so far.  Dave’s feet were in bits and mine were starting to feel pretty sore as well!  Never mind, we thought, it’s only 3 miles to Crianlarich and the going is much easier now.  HA!!!!!!!!!!! We hadn’t bargained for the Sheep Creep and Cow Poo Alley!  The sheep creep is a bit where you go under the railway.  It was constructed when the line was built to enable livestock to pass from one side to the other.  So it’s pretty much sheep sized, not person sized!  I managed ok just by crouching down but Dave struggled being (a) taller than me and (b) carrying a large pack!  I was too busy laughing at Dave’s shuffle/limbo to take any photos myself but here’s one from Harry Rabbit’s blog to give you the idea!

Then we were onto the delights of Cow Poo Alley – apparently this stretch of the trail is notorious! It runs alongside a dry stane dyke on one side and a field of coos on the other and as the name suggests is pretty much full of cow poo.  You have the choice of wading through it up to your ankles, or trying to dodge it by jumping from one rocky part to the next – not exactly making for easy, relaxing walking!

This stretch did just seem to go on forever – we were tired, our feet hurt and we just wanted to get to Crianlarich and relax!  However even the crappiest parts of the West Highland Way have pretty spectacular views 🙂 so I was still smiling despite the cow poo!

Finally at about 5.30 we arrived at the Crianlarich crossroards – SUCH a welcome sight!  Unfortunately, this did not mean we could relax as Crianlarich itself is a mile off the trail so we had an extra mile to walk before we could crash out!

I had booked a single room in a B&B which was fully booked, so Dave said goodbye to me at the doorway and went off to find somewhere for himself.  This prompted some enquiries from Charlie the B&B owner as to who this chap kissing me goodbye at the door was!  After explaining to him that we were both walking the Way, but not really together, I’m sure he thought we were properly bonkers.  This impression was not helped when, after I’d settled into my room (which turned out to be a double) Dave called me to say all the other B&Bs were full!  So off I went to ask Charlie if he could stay too (which was fine!)  All sorted and settled, we showered, headed to the pub for dinner, and once again were asleep by about 8!

Days 3 and 4 were probably the toughest of the whole walk for me.  Both evenings I was too exhausted to do anything other than shower, eat and crash out – I didn’t even manage to write in my journal.  I had expected the path around Inversnaid to be hard going, but hadn’t appreciated just how much it would slow me down and sap my energy.  I never got any blisters but the soles of my feet were really hot and inflamed after Day 4 – even after copious amounts of running under cold water and applying Deep Freeze gel they still felt hot and sore!  Overnight I kept waking up as they were painful, and at about 1 am the thought crossed my mind of whether I would actually make it through Day 5 – this was to be my longest day of the whole walk, at 16 miles – 17 including the walk back to the trail from Crianlarich.  Thankfully when I woke in the morning they felt considerably better – sleep is amazingly miraculous and healing!